Wei-chen Chang, assistant professor in the Department of Chemistry at NC State, has received a Faculty Early Career Development Award from the National Science Foundation (NSF). The award, also known as the NSF CAREER award, is one of the highest awards the foundation bestows upon young faculty in the sciences. 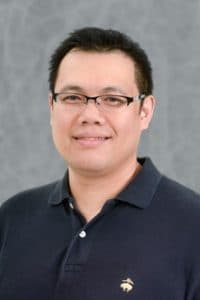 The five-year award will support Chang’s research project entitled “Investigating Non-heme Iron Enzyme Catalyzed Nitrile Formation Mechanisms in Etoposide and Other Natural Product Biosynthetic Pathways.” This project aims to repurpose specific iron-containing enzymes to speed up a variety of chemical reactions that these proteins do not typically perform, including the biosynthesis of compounds of industrial interest.

Chang and his team will redirect the reaction outcome of enzymes that typically break down molecules in order to create new compounds by adding useful chemical groups. A complementary objective is to elucidate, through various chemical probing and kinetic approaches, the mechanism by which these enzymes catalyze these non-native reactions.

This project will also include opportunities to introduce underrepresented middle school students in rural areas of North Carolina to research in chemical biology. Additionally, Chang aims to develop an undergraduate course in enzyme kinetics that integrates chemical and biochemical concepts through active learning models.