Chemists find inspiration many unique and diverse places. A medicinal chemist may dive into the ocean seeking novel, potent natural products to design new cancer therapeutics; whereas, a photochemist attempts to replicate and improve the light harvesting power of chlorophyll. NC State’s Maria Gallardo-Williams, teaching associate professor of organic chemistry, finds inspiration inside the classroom; specifically, she looks to her students for ideas in teaching innovation.

Gallardo-Williams began transforming how chemistry was taught by developing Student-Made Audiovisuals Reinforcing Techniques or SMART videos. These are student built ‘how-to’ videos that provide an overview of various organic lab instrumentation, calculations, and benchtop techniques. The first video, explaining how to complete an IR lab, was filmed using video cameras and equipment borrowed from the NC State library.

After a successful trial run with a student-made IR lab video, Gallardo-Williams and her students created four more SMART videos. Then during a summer semester, she evaluated the effectiv

eness of these videos for instigating student-learning. The summer classes were split into two sections with one lab led by a traditional TA, who provided lab instructions, and the other session used a SMART video to describe lab procedures (the TA was still present to offer additional support).

The results from this preliminary study were quite shocking. Students who watched SMART videos were able to follow lab directions more efficiently and demonstrated a greater conceptual understanding of lab material but felt less prepared for lab. The students who had a traditional TA felt more prepared and comfortable with lab concepts but performed worse in lab (J. Chem. Ed. 2016 DOI: 10.1021/acs.jchemed.5b00354). Gallardo-Williams consulted the literature and discovered that her observations from the SMART video pilot study were an emerging trend in the field of chemical education.

“What you think is good for your learning, doesn’t necessarily translate into learning outcomes,” says Gallardo-Williams. “You may like that your TA told you what to do, as opposed to watching a video, but it turns out that when you watch the video you do better.”

Ultimately, these findings led to a DELTA Grant and the production of 25 additional SMART videos (these videos are publicly available on the NC State Organic Teaching Lab YouTube channel). These student-made videos also revealed a niche in the field of chemical education research, and the classroom, for education material created by students.

“A lot of time as instructors we feel that our job is to create content and put it out there [for students], and it turns out that the students don’t learn so well from the materials that we make,” says Gallardo-Williams.

Each semester Gallardo-Williams’ students participate in a special organic chemistry project that incorporates these lessons in student learning. Class projects require students to create their own visualizations and explanations of organic themes. One year the students designed posters for the state fair, then they created chemical infographics; this past semester the students created organic chemistry tutorials. Sometimes these projects can go in unexpected directions beyond the classroom, like the #IHeartChemistryNCSU initiative (Chem. Educ. Res. Prac. 2017 DOI: 10.1039/c7rp00132k).

“We empowered the students to pick any compound that you like and represent it anyway that you want to, and it turns out that a lot those representations are very artistic,” says Gallardo-Williams. “I didn’t set out to tell the students that they had to be artistic; I told them you can use all the resources that are available in the Makerspace and I will help you in any way that I can. Just make this interesting to other people.” 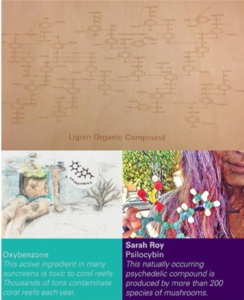 Students created their representations of organic chemistry using a variety of different media. Kit Manchette produced a time-lapsed YouTube video about creating a wax-drip painting of a benzene IR spectrum using crayons and a hair dryer. Other students created chemical postcards to raise awareness about coral bleaching (some sunscreens contain the active ingredient oxybenzone which is toxic to coral reefs), while Sarah Roy’s artistic postcard focused on the psychedelic psilocybin

(a compound found in over 200 species of mushrooms). Trevor Graham chose wood for his project’s medium and etched the organic polymer, lignin, into it. Lignin provides structural support to plant cell walls and is a key structural component of bark and wood. I Heart Chemistry was driven by finding ways to make the students feel connected to the chemistry they are learning in the classroom.

“A lot of times our students come to us and they aren’t motivated because nobody told them that chemistry can be cool, with the I Heart Chemistry project I wanted them to tell me what kind of chemicals they found interesting,” says Gallardo-Williams.

I Heart Chemistry’s transition from a classroom project into a sci-art movement—a subfield dedicated to representing scientific principles with art—would spark a series of new teaching projects. These new projects would focus on helping students to embody the chemistry they were learning. This embodiment would occur in two unexpected ways through dance and acting.

A common struggle that incoming undergraduates face with chemistry is conceptualizing where chemical reactions are occurring and what these reactions look like when they happen. One tool Gallardo-Williams uses to help students visualize these reactions is asking students to act out the reactions in their textbooks. This simple classroom activity was later choreographed by the NC State dance company to portray SN1 and SN2 substitution mechanisms.

“I thoroughly enjoyed working with Maria. I especially enjoyed having the students perform Dancing Chemical Reactions in Washington DC at the Smithsonian, for the ACCelerate Festival of Creativity and Innovation,” says Tara Zaffuto Mullins, director of NC State’s dance program. “My favorite part was when some of my dance students, who were also in her class, we’re completely able to grasp the concept of the reaction by dancing it. This truly spoke to my belief that the arts do not have to be separate from other academic disciplines but can enhance them.”

Dancing Chemical Reactions would soon transition into Acting Out Chemical Reactions at the NC State’s State of the Sciences (an event that showcases the school of sciences to the public). A group of chemistry graduate students would ask event attendees to act out various chemical scenarios, like boiling water or forming salt bridges between ions.

What is the next frontier for student-made organic chemistry visuals? Virtual reality labs.

The IR lab is the first lab created in virtual reality; coincidently, this was the same lab used to create the first SMART video. VR labs are created using 360◦ shot videos of actual NC State labs located in the Mary Anne Fox Science Teaching Laboratory building. It even includes a 360◦ video of a TA providing lab assistance. This creates a ‘real’ feeling virtual environment and avoids a cartoon, video game experience.

“We have started testing VR labs with students this summer. So, far they seem to really like it!” says Gallardo-Williams. “One student told me that he didn’t expect to like the VR experience, but that it felt to him intensely personal, since it was a ‘real’ TA talking directly to him and guiding him to complete the lab.”

There’s no doubt that Gallardo-Williams will be spending her summer dreaming up new ideas to inspire a love for chemistry in her students. “The students drive everything. If the students didn’t want to do this, we would be doing something different,” says Gallardo-Williams.