Learn more about our speaker 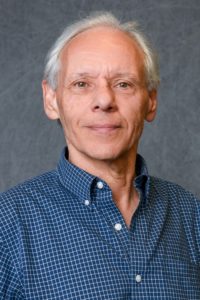 Ed Bowden joined the Department of Chemistry in 1984 as an Assistant Professor and is currently serving as Department Head. Prior to joining NC State, he attended Syracuse University, worked for several years as an engineer in industry (RCA, DuPont) before seeing the light and earning a PhD in Chemistry at Virginia Commonwealth University under the influential guidance of Fred M. Hawkridge.  That was followed by a rewarding postdoctoral appointment with John F. Evans at the University of Minnesota before relocating to Raleigh. During his career at NC State, Ed had the pleasure of working with an amazing group of dedicated and creative graduate students and postdocs pushing research frontiers in interfacial protein electrochemistry, enzyme electrocatalysis, and self-assembled monolayers.  Ed also taught regularly in the general chemistry program, and in undergraduate analytical chemistry and graduate electrochemistry courses. He served the department as Director of Graduate Programs from 1999-2008, as Interim Chair from 2015-17, and as Head since 2017.