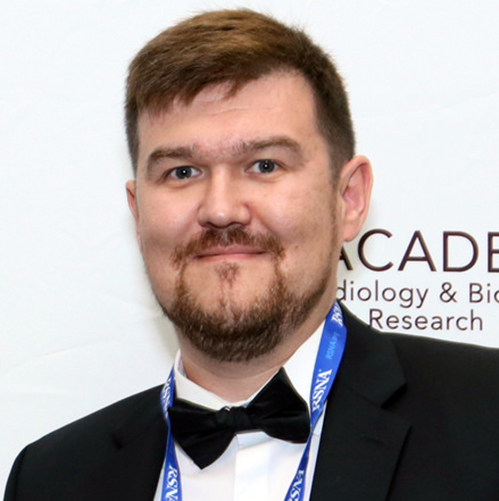 Eduard (Ed) Chekmenev received BS degree in Chemistry at Perm State University in Perm, Russia. He continued his education in the sister city, Louisville, KY, and received Ph.D. Degree in Physical Chemistry at the University of Louisville in 2003. Dr. Chekmenev did his postdoctoral work at the National High Field Magnetic Laboratory (Tallahassee, FL), and California Institute of Technology and Huntington Medical Research Institutes (Pasadena, CA) in 2003-2009. Ed Chekmenev started as an Assistant Professor of Radiology at Vanderbilt University Medical Center to develop and validate hyperpolarized contrast agents for molecular and functional imaging. He received a number of prestigious awards, including the Era of Hope Scholar Award from DOD CDMRP Breast Cancer Program in 2012, and Distinguished Investigator Award from RSNA Academy for Radiology & Biomedical Imaging Research in 2017. In 2016, he was elected to the Russian Academy of Sciences. He has co-authored more than 100 peer-reviewed publications, and numerous book chapters and patents. In 2018, he joined the faculty of Wayne State University Department of Chemistry and Karmanos Cancer Center.